I’ve been a lover of Fair Isle knitting for as long as I remember. I truly think that growing up watching The Sullivans was the cause of this happy mallady. 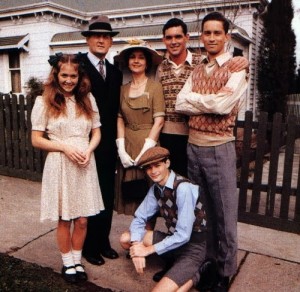 Set in the 1940’s patterned vests played a supporting role to life in the kitchen and Mrs Jessop’s gossiping ways!
About the same time Mum got this book. 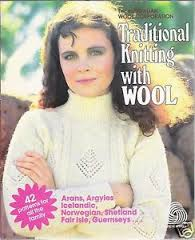 It had pictures of traditional knitting from many places, but it was the Fair Isle garments that really captured my imagination.
They intrigued me, as I was only a child knitter making dolls clothes and, if adventurous, adding a stripe here or there. How DID they get those patterns in there?  When I had made more dolls clothes than they could wear, I graduated to knitting for myself. My second garment was a Fair Isle Jumper of 15 colours. I was 15 years old and it was the late 1980’s. Just let me say there are a few ‘interesting’ colour combinations in there! When I look back on that garment I see bad technique, bad guage, but a whole lot of love! 25 years later, I still get it out and wear it at least once each winter. Sometimes as a joke, but some years it has been ‘on trend’!
So over a few posts I’m going to delve into the history of Fair Isle. What it is, what it isn’t. I’ve got the Fair Isle mallady again! And I love it!
Kx.